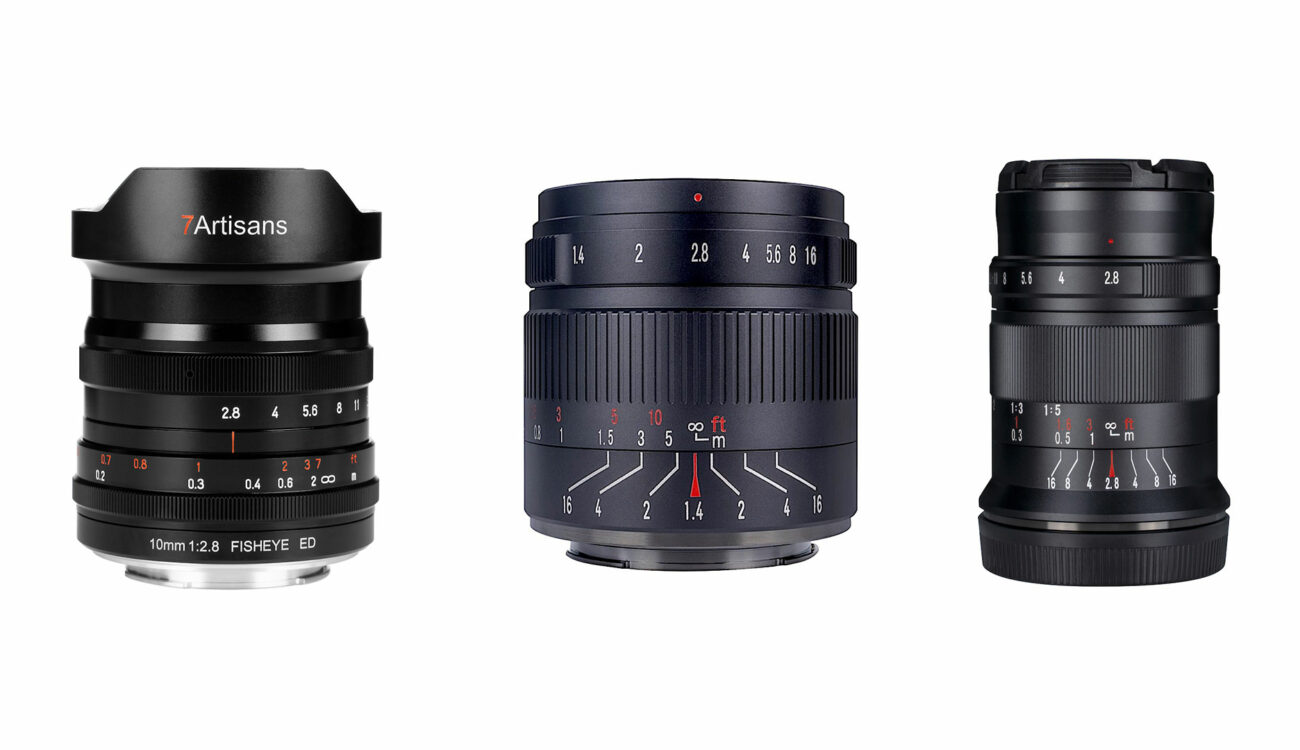 If you’re new to 7Artisans: this Chinese lens manufacturer is known for making very fast manual photographic lenses at an affordable price. Last year, we reported about their 35mm F/0.95 lens that retails for only $255.

The company is back with three new models in its lineup: the 7artisans 10mm F/2.8 Fisheye, the 55mm F/1.4 II, and the 60mm F/2.8 II Macro lens. All these lenses are fully manual – focus and aperture – and feature a de-clicked aperture ring, ideal for filmmakers.

The 7Artisans 10mm F/2.8 is a Fisheye lens with a very wide 178° field of view on a full-frame mirrorless camera. At the moment, it is available in various lens mounts including Sony E, Canon RF, Nikon Z, and L-mounts.

The 7Artisans 10mm F/2.8 Fisheye is entirely made out of metal, which results in a weight of 580g/20.4oz despite some pretty compact dimensions of only 68mm x 87mm (length x diameter).

The lens design of the 7Artisans 10mm F/2.8 consists of eleven lens elements in eight groups with one Extra-Low Dispersion glass and four High Refractive Astigmatism lenses. The aperture diaphragm has eight blades – bokeh is close to non-existent on a fisheye lens whatsoever – and you can’t put any filters in front of the lens.

The first version of this lens was released back in 2018, and it looks like the company changed the optical formula for the second version. Indeed, this lens design now consists of six elements in five groups, and the aperture diaphragm has nine blades (instead of 14 in the previous version).

Last but not least is an updated version of the 7Artisans 60mm F/2.8 II Macro, which is available in numerous lens mounts, including FUJIFILM X, Canon EOS-M, Nikon Z, MFT, and Sony E-mounts. This lens is only compatible with APS-C cameras.

The 7Artisans 60mm F/2.8 II Macro has a minimum focusing distance of only 17.5cm, which is perfect if you plan on shooting insects or small details of a product. In terms of lens design, this 60mm F/2.8 II Macro consists of eleven elements in eight groups with one HOYA Ultra-Low Dispersion Glass to reduce chromatic aberrations. The aperture diaphragm has nine aperture blades for a creamy bokeh.

As always, with really fast or special lenses at very affordable prices, I’m curious to see real-world footage shots with these, as you often can’t have the cake and eat it too. As you can imagine, you’ll probably have to stop the lens a bit to get tack sharp results.

What do you think about these new lenses? Did you already try one yourself? Don’t hesitate to let us know in the comments down below!

Samsung Galaxy S22 won't be getting an under-display selfie camera

Xiaomi update trick: How to get the next MIUI version