Over the years, Computex has hosted some of the most exciting announcements from the industries leading companies. This year was no different, with AMD finally revealing both the price and release dates of its eagerly anticipated 5700G/ 5600G desktop APUs – set to hit shelves on the 5th of August 2021 with a retail price starting at $259/$359.

There’s a tonne of excitement surrounding the new ‘Cezanna’ desktop APUs, mainly because they’ll be the first to feature the latest Zen 3 cores. Whilst the new architecture has been available within the Ryzen mainstream, Ryzen mobility, and EPYC server CPU platforms, the same can not be said for the APU alternatives.

The Ryzen 5000G desktop APU family will host three exciting processors; 5700G, 5600G, and 5300G – with the latter still being under lock and key in terms of release date and pricing. Like always, AMD are claiming some pretty impressive performance figures – with both APUs set to eclipse their Intel counterpart. 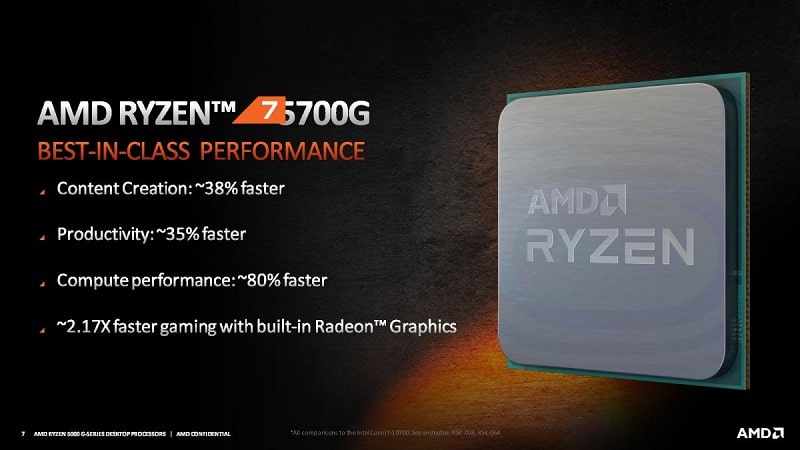 The AMD Ryzen 7 5700G will be the flagship offering, equipped with 8 cores and 16 threads, respectively. It will feature impressive clock speeds of 3.8GHz base and 4.6GHz boost, alongside a total of 16MB L3 cache and 4MB L2 cache. TDP will be equivalent to its predecessor at 65W and it will carry VEGA integrated graphics – VEGA8 according to sources – with 8 CUs and 512 stream processors (all running at 2.0GHz).

The Ryzen 7 5700GE will feature similar specs, only with a lower 3.2GHz base clock and a much lower 35W TDP. 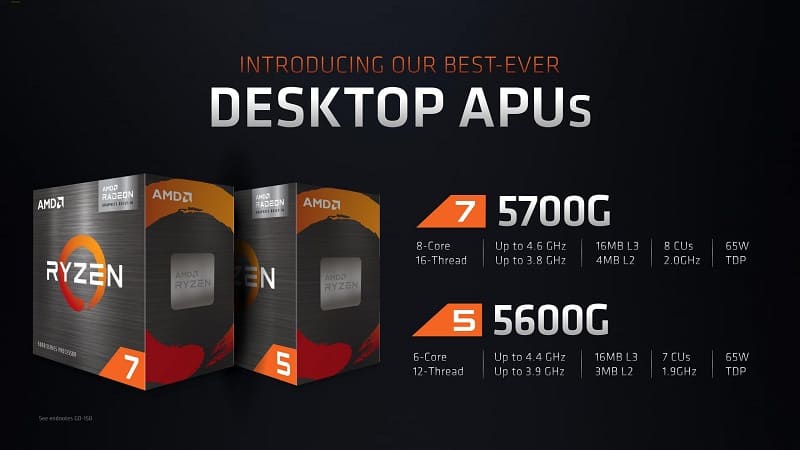 The Ryzen 5 5600GE will feature the same specs as the desktop DIY alternative, only with a lower 35W TDP and 3.4 GHz base clock. 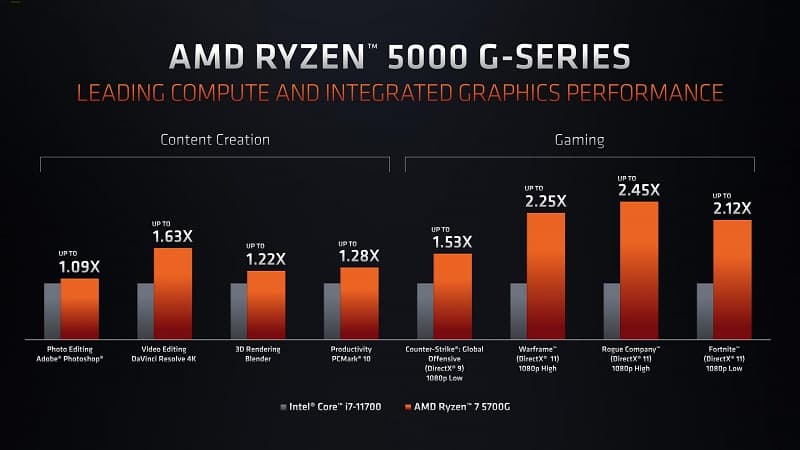 As you can see from the slide above, displayed during the AMD Computex keynote, the Ryzen 7 5700G is set to offer some pretty impressive performance boosts over the Intel Core i7-11700. Users can expect over double the performance of the Intel counterpart in Warframe, Rogue Company, and Fortnite – with CS:GO offering a 53% boost, respectively.

As for content creation and workstation-type tasks, the new APUs aren’t as impressive – only showcasing a 28% boost in productivity. 3D rendering saw a 22% increase, with photo editing within the Adobe suite being almost identical to Intel (9% better). Video editing saw the biggest improvement over the competition, boasting a  63% boost in DaVinci Resolve in 4K.