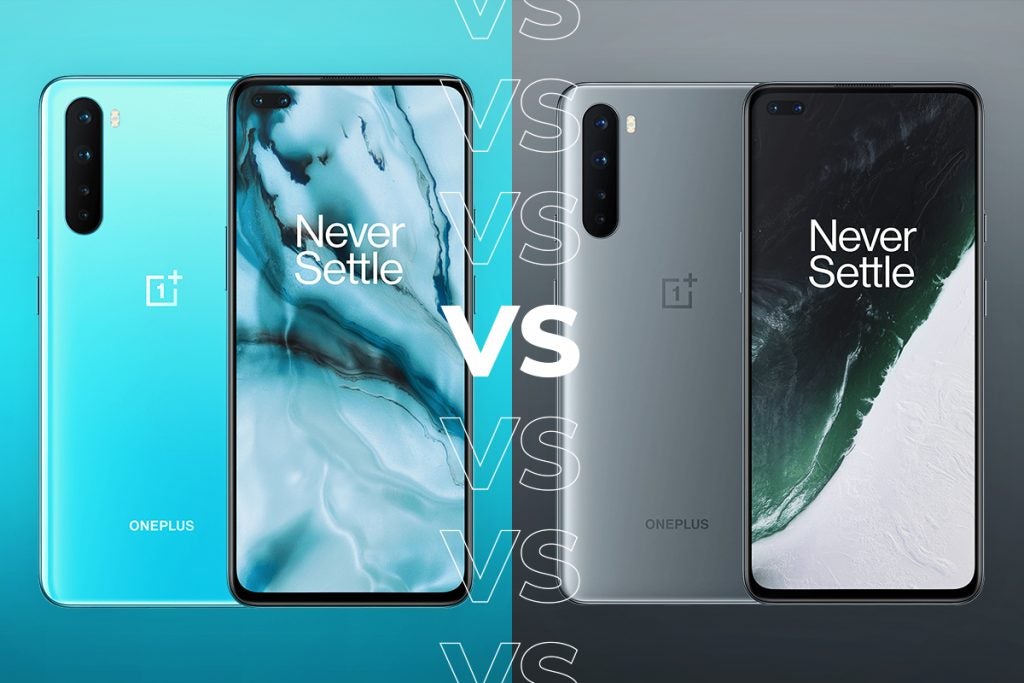 OnePlus just announced the newest member of the Nord family, the Nord CE 5G (Core Edition). But, does it differ from the original OnePlus Nord?

The OnePlus Nord captured our attention when it launched in 2020 as one of the best cheap phones around. The handset offers a well-rounded set of features, including a high quality OLED display, nice design, 5G and fast charging at an incredibly affordable price.

Now, OnePlus has unveiled the Nord CE. This offers a similar host of great features – for even less. Read on to find out how the Nord CE 5G compares to the regular OnePlus Nord.

The OnePlus Nord is also powered by a mid-range Snapdragon chip, the 765G 5G.

“This might not have the benchmark scores of an 865, however nothing I have tried seems to slow this phone down”, wrote Deputy and Mobile Editor Max Parker in our review of the OnePlus Nord. “Bouts of PUBG, Call of Duty Mobile and taxing games play without a hitch or dropped frame rate and everything feels smooth and fluid when you’re doing daily tasks”

The Nord also features the Adreno 620 GPU and comes with a choice of 8GB or 12GB RAM and 128GB or 256GB storage. Both the Nord and the Nord CE feature support for 5G, Bluetooth 5.1 and run OxygenOS based on Android 11.

When it comes to cameras, the OnePlus Nord has an abundance.

The Nord CE, on the other hand, features three cameras on its rear – a 64-megapixel main sensor (f/1.79), an 8-megapixel ultra-wide sensor (f/2.25) with a 119° field of view and a 2-megapixel mono lens (f/2.4). There’s a 16-megapixel selfie camera on the front and the rear camera can capture 4K video at 30fps and has super slow motion and time-lapse modes. There’s also Nightscape, which allows you to take clearer images at night.

The setup pales, at least on paper, in comparison to the original Nord, which packs four cameras on its rear and two on the front.

While we were impressed by the 48-megapixel lens and enjoyed the addition of the ultra-wide front camera on the Nord, some of the sensors did seem less necessary. We noted in our review that we would have preferred the 5 and 2-megapixel sensors be swapped out for something more useful, such as wireless charging.

Like the CE, the Nord is capable of capturing 4K video at up to 30fps with its rear camera and supports super slow motion, time-lapse and Nightscape modes.

The Nord CE comes with a 4500 mAh battery, 385 mAh larger than the original Nord’s 4115 mAh battery. That said, the CE is still apparently capable of charging in the same time despite its bigger size thanks to its Warp Charge 30T Plus fast charging. This enables the phone to go from 0 to 70% in just half an hour.

At £30-£50 less (depending on the RAM and storage you opt for), the Nord CE offers a lot of value for money. The phone is slightly slimmer and lighter than the original Nord, has a larger battery, includes the coveted headphone jack and features a larger 64-megapixel main sensor.

The Nord, meanwhile, offers a larger camera array with an ultra-wide angle camera on the front that makes taking selfies with multiple people much easier. The phone also boasts fast performance thanks to the Snapdragon 765G. We’ll have to wait to see if the 750G chipset powering the Nord CE can keep up with the 2020 Nord’s speed.