Realme is making its name in the budget segment thanks to the very competitive Realme C-series smartphones. These devices often bring decent specifications for a very appealing price. Last month, the company unveiled the Realme C20, C21, and C25 smartphones in India. Now, it is preparing terrain to launch a beefed-up Realme C25 smartphone dubbed Realme C25s. According to MySmartPrice that cites industry sources, the new budget smartphone which has been released in the Malaysian market will soon reach the sub-continent.

There aren’t many differences between the Realme C25s and the vanilla C25 except for the better chipset. The Realme C25s will bring an improved Helio G85 SoC alongside 4GB of RAM and 128GB of onboard storage. Without further ado, let’s dive in the specifications offered by these smartphones.

According to the report, the Realme C25s will pack a 6.5-inch LCD with an HD+ resolution with at least 1,600 x 720 pixels. The display has 570 nits of max brightness and a screen-to-body ratio of around 88.7 percent. The smartphone adopts the waterdrop notch style and the cutout serves as a home for the 8MP camera with an f/2.0 aperture.

Moving around to the back, the handset packs a Quad-Camera setup with a primary 48MP shooter. The secondary camera is a 2MP B&W sensor, while the third is a 2MP macro sensor. As you can see out of the three the 48MP shooter clearly is the most useful. In terms of dimensions the handset measures around 164.5 x 75.9 x 9.6 mm, and weighs about 209 grams. 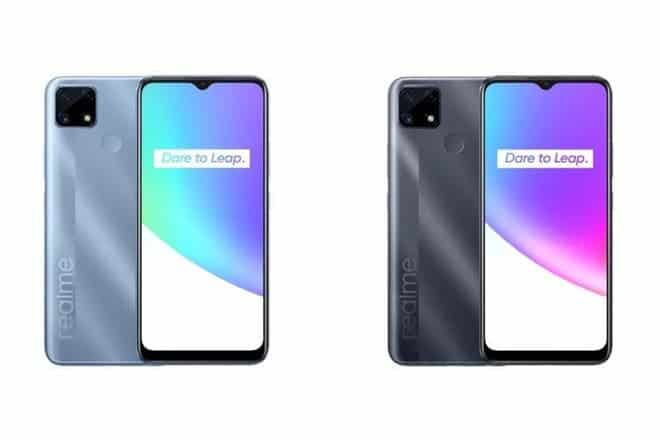 That weight is justified by a massive 6,000mAh battery which charges via the USB-C port at up to 18W charging. Although 18W isn’t the fastest standard anymore, I’m glad to see more than 10W on this handset. Companies tend to offer lackluster charging speeds on low-end smartphones. Some companies are still struggling to surpass the 15W barrier in the mid-range department. Thankfully, the C25S will have acceptable 18W charging.

Under the hood, the Realme C25s comes with the MediaTe Helio G85. This is an Octa-Core chipset with a gaming-centric appeal. It may not be the most power-efficient with its aging 12 nm architecture. But for the budget segment, it certainly delivers.  The handset runs Android 11-based Realme UI 2.0 which is certainly great since most Realme smartphones in the budget segment are still struggling to get Android 11. The device also has a rear-mounted fingerprint scanner. Other features include dual nano-SIM support, 4G VoLTE, Wi-Fi 802.11 b/g/n/ac, Bluetooth 5.0, GPS, and a 3.5mm audio jack.