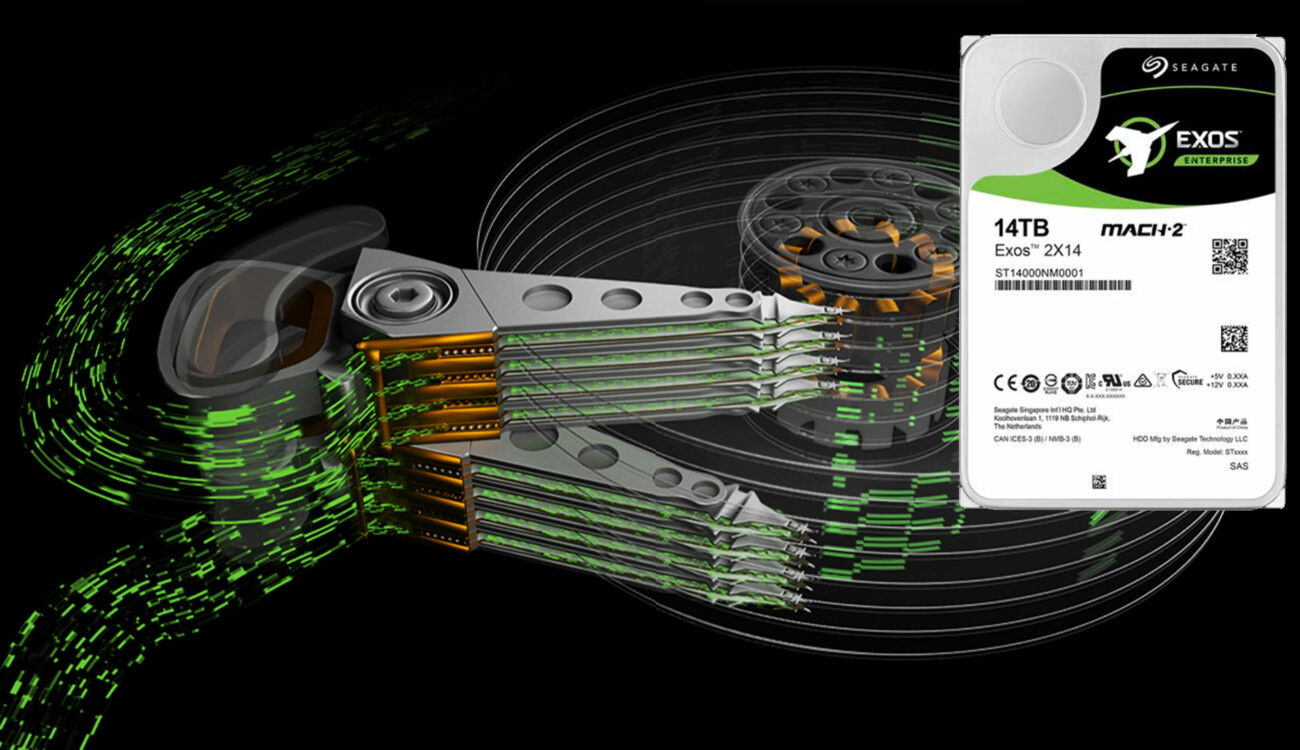 Seagate MACH.2 Technology offers double the IOPS when compared with traditional HDDs. While still being a 7200rpm drive, the MACH.2 uses two actuators and reading heads instead of one. The newly announced Seagate Exos 2X14 offers 14TB of capacity and a maximum sustained transfer speed of 524MBps that rivals some SSD drives. The pricing and availability of the drive are unknown yet.

Disc manufacturer Seagate has been researching and promoting the Multi Actuator Technology (MACH.2) for years and while its main goal is to speed up the IOPS performance and read/write speeds, the company also found out the MACH.2 design also cuts down test time and therefore reduces costs.

The Seagate drives equipped with the MACH.2 technology are standard 7200rpm spinning drives, but instead of one actuator, they incorporate two. An actuator is a component that moves a hard drive’s heads over the media surface, to read and write data. Each recording head sits at the end of a moving actuator arm. Hard drives today are equipped with a single actuator, which moves all the read-write heads together in synchronous motion. This design, according to Seagate, can double the IOPS (input/output operations per second) performance of the drive, because both actuators can move independently.

Seagate recently disclosed the specs of its new drive with the MACH.2 technology – the Seagate Exos 2X14 offers 14TB capacity and a maximum sustained transfer speed of 524MBps. This kind of speed actually already rivals some traditional SATA SSD drives. The drive includes two logical units – each with a 7TB capacity and its own reading head with an actuator.

The MACH.2-equipped drives are not yet publicly available, but Seagate already has large customers such as Microsoft interested in the drives for their data centers. According to The Register, Microsoft bought plenty of early production MACH.2 drives from Seagate and used them for Project Olympus servers in the Azure cloud. According to Seagate, the drives are still in a technology-staging mode. The plan is to offer these drives with 30TB capacity soon.

The price of the drives has not been announced yet, but it is expected that Seagate will charge a premium for the new technology. Even though there are cost benefits for Seagate, the company will most likely not transfer these benefits onto customers until the competition brings out similar technology.

Do you use traditional drives in your workflow, for instance in NAS? What do you think about the MACH.2 technology? Let us know in the comments section underneath the article.